Velchanos was apparently well-known on Crete but didn’t make a big splash on the mainland (another god who was absorbed by Zeus) and has been largely forgotten in the annals of time.  I extrapolated from what I could find in the existing myths, and merged in some African myths, which is where I believe Athene originated. I wanted Crete to have an African flavor to its religion. Remember: Athene is universally accepted as being “Un-Greek,” (and pre-Greek pantheon) and is thought to have come from “Libya,” which is the name given by the ancients to the whole of (the then explored) Africa. Since nobody really knows what the Cretans believed or how they operated, I felt I had some freedom. 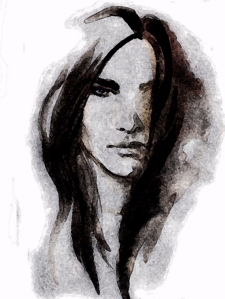 “Since the goddess herself was not permitted to die, the annual death and rebirth were acted out by a young male Year-spirit, a small and inferior deity who took the roles of son and consort, and represented the important principle of discontinuity in nature. In the Minoan period he remained important; his original Minoan name, Velchanos, seems to have endured into the classical period as one of the titles attributed to Zeus on Crete. Zeus Velchanos was also known on Crete as ‘Kouros’, ‘The Boy’. Velchanos was always subject to the goddess and always shown in attitudes of adoration. The two ivory ‘Divine Boy’ figurines described by Evans as probably having come from the Labyrinth, may well be representations of Velchanos before and after puberty.”

“Often Minoan worshippers tore branches or boughs from a sacred tree and venerated them on altars or planted them in the sockets between sacral horns. Sometimes, they built shrines round sacred trees, apparently providing access to them by means of double doors and safeguarding them by means of wooden fences or stone walls. In some ceremonies, an attendant, often male, tore a bough from the shrine-tree to the accompaniment of gestures of lamentation from the priestess and others present; this overwrought scene, shown on several rings, seems to have symbolized the death of the young god and may conceivably have been followed by the sacrifice of the male attendant who represented him.”

Rodney Castleden gives more attention to Velchanos in his book, The Knossos Labyrinth: A New View of the ‘Palace of Minos’ at Knossos.

He talks about a few of the goddesses worshiped on Crete in Chapter 9 “The Lady of the Labyrinth,” and goes on to say: “Another was a Goddess of Renewal and she was connected with the central rites of the vegetation cycle. Often the annual death and rebirth were acted out by a young male deity, a Year-spirit who took the roles of both son and consort. This small but heroic figure who died and was born again every year, just like Adonis, seems to have been the prototype for Zeus, although in the Minoan period he was subordinate to the goddess whom he served. The cult surrounding this proto-Zeus continued after the Minoan civilization came to an end and it seems that his original Minoan name survived in one of the titles attached to Zeus on Crete–Velchanos.

The Greek Myths, (Robert Graves) contains probably the most well-known description of Velchanos. He translates the meaning of Velchanos as “the king who drags his foot.”

“Hephaestus is sometimes described as Hera’s son by Talos (see 12.c), and Talos as Daedalus’s young nephew; but Daedalus was a junior member of the House of Erechtheus, which was founded long after the birth of Hephaestus. Such chronological discrepancies are the rule in mythology. Daedalus (“bright” or “cunningly wrought”), Talos (“sufferer”), and Hephaestus (“he who shines by day”), are shown by the similarity of their attributes to be merely different titles of the same mythical character; Icarus (from io-carios, ‘dedicated to the Moon-goddess Car’) may be yet another of his titles. For Hephaestus the smith-god married Aphrodite, to whom the partridge was sacred; the sister of Daedalus the smith was called Perdix (‘partridge’); the soul of Talos the smith flew off as a partridge; a partridge appeared at the burial of Daedalus’s son Icarus. Besides, Hephaestus was flung from Olympus; Talos was flung from the Acropolis. Hephaestus hobbled when he walked; one of Talos’s names was Tantalus (‘hobbling, or lurching’); a cock-partridge hobbles in his love-dance, holding one heel ready to strike at rivals. Moreover, the Latin god Vulcan hobbled. His cult had been introduced from Crete, where he was called Velchanos and had a cock for his emblem, because the cock crows at dawn and was therefore appropriate to a Sun-hero. But the cock did not reach Crete until the sixth century B.C., and is likely to have displaced the partridge as Velchanos’s bird.

The Santorini caldera by Sorbis, Shutterstock

The island now called Santorini has had many names throughout the centuries. One of the oldest known names, and the one I use, is Callisti. In ancient Greek, it means “The Most Beautiful,” and is alternately spelled Kalliste.

Strongyle, another of Santorini’s ancient names, meant, “The Round One.”

Thera, another name long used for this volcanic island, can be translated as: