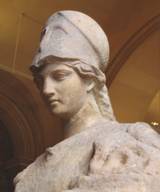 Everyone knows the Classical version of Athene (or Athena, as most spell it). It is so well known that I won’t bother to repeat it here. My concern is for the lesser-known version of her myth and power, which has absolutely nothing to do with Zeus. It is this far more obscure Athene who appears in the series. She was well-established, powerful, venerated, when Zeus was hardly more than a thought.

It was Dawn of the Gods, by Jacquetta Hawkes, that first got me thinking about Athene in a different way. I would credit this book with being the initial inspiration for The Child of the Erinyes series after Moon, Moon, by Anne Kent Rush.

Jacquetta begins speaking of Athene right away, in Chapter One:

page 17: “A daughter of Zeus, one of the exalted ones of Olympus and of Homeric epic, the goddess whose temples and statues and festivals dominated the birthplace of democracy, we see Athena in the clear light of the Classical world. Yet there in the shadow of her shield hid the python, and her aegis too was snake-bordered.

While her name and her association with birds (even with the owl) reach far back into the prehistoric past, it is the snake which most forcefully expresses Athena’s great antiquity. The python survives from days when the goddess was identified with the protective snake of house and palace, and when her interest was more with the earth and physical life than with the sky and the light of thought.

Although, like all deities, Athena had changed with the times, she had come into the world an incalculable age before Phidias made his chryselephantine masterpiece. By that date in the fifth century B.C. she had already been lodged on the Acropolis for nearly a thousand years, and her origins were far older still.

page 19: It has just been said that the myth of her birth is untoward because in historical truth her advent was neither abrupt nor motherless. But the story can be given a more acceptable interpretation. Before Athena was delivered from his head, Zeus had swallowed the pregnant Metis. If this can be taken to mean that the masculine Greek culture swallowed the feminine Minoan one, but that the resulting offspring possessed the normal share of her digested mother’s inheritance, then this is a fair rendering or what happened in the lands round the Aegean Sea between 2,500 and 3,500 years ago.

Page 31: At about the time when the images of the snake goddess were being set up in their Knossian shrine, a dramatic change was taking place in the relationship between the islanders and their neighbours on the mainland. By 1600 B.C. Crete was approaching the height of her power. She was exercising a strong influence on mainland Greece.

On their side the Achaeans enjoyed a sudden access in wealth and ambition, and opened themselves to Minoan culture. They imported Cretan goods, and they imitated them. The rulers, although they retained their masculine, warrior temper, fortifying their citadels and glorying in the possession of splendid weapons, turned themselves from barbarian chiefs into palace-dwelling princes. Greece was now divided into small kingdoms, each with its royal house. Of these, Mycenae came to be the wealthiest and commanded the greatest military strength. It is for this reason that from the sixteenth century B.C., when they accepted so much of Minoan civilization, the Achaean Greeks are said to have entered the Mycenaean Age. 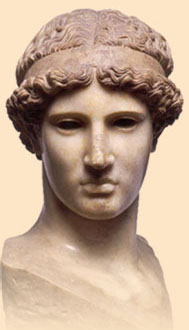 page 33: As part of this acceptance, the Mycenaeans took to themselves a part of Minoan religious practice. Zeus and the other gods they had brought with them kept an important place, but the Mediterranean goddess was made welcome, especially in her role as protectress of the royal house. Her symbols appeared at Mycenae and the other mainland centres in exactly the forms they had assumed in Crete, and tribute was poured out at her shrine.

Often the Achaeans referred to the household goddess simply as Lady of the place of her shrine–as Roman Catholics will now refer, for example, to Our Lady of Lourdes. She may sometimes already have been called Athena. The name itself is un-Greek and was perhaps in use among the Minoans. Certainly at least four of the symbols of the Minoan goddess–the snake, the bird, the pillar and the shield–were to be inherited by the Classical Athena.

The Greek Myths, by Robert Graves, continued the discussion of Athene as a different sort of goddess than the one I was introduced to in my youth:

“According to the Pelasgians, the goddess Athene was born beside Lake Tritonis in Libya, where she was found and nurtured by the three nymphs of Libya, who dress in goat-skins. As a girl she killed her playmate, Pallas, by accident, while they were engaged in friendly combat with spear and shield and, in token of grief, set Pallas’s name before her own. Coming to Greece by way of Crete, she lived first in the city of Athenae by the Boeotian River Triton.

Plato identified Athene, patroness of Athens, with the Libyan goddess Neith, who belonged to an epoch when fatherhood was not recognized.

Apollodorus’s account of the fight between Athene and Pallas is a late patriarchal version: he says that Athene, born of Zeus and brought up by the River-god Triton, accidentally killed her foster-sister Pallas, the River Triton’s daughter, because Zeus interposed his aegis when Pallas was about to strike Athene, and so distracted her attention. The aegis, however, a magical goat-skin bag containing a serpent and protected by a Gorgon mask, was Athene’s long before Zeus claimed to be her father.

Pottery finds suggest a Libyan immigration into Crete as early as 4000 BC; and a large number of goddess-worshipping Libyan refugees from the Western Delta seem to have arrived there when Upper and Lower Egypt were forcibly united under the First Dynasty about the year 3000 BC. The First Minoan Age began soon afterwards, and Cretan culture spread to Thrace and Early Helladic Greece.

The goddess Athene, patroness of a pre-Hellenic medical cult, was not originally regarded as a maiden; the dead hero having been both her son and her lover. Her all-heal was the mistletoe; a parasite of the oak. Mistletoe was regarded as the oak-tree’s genitals. The viscous juice of its berries passed for oak sperm, a liquid of great regenerative virtue.”

While Athene liberally sprinkles the pages of The Myth of the Goddess, Evolution of an Image, by Anne Baring and Jules Cashford, I will quote just one excerpt, from page 343:

“Zeus, as the embodiment of the new order, is also validated politically through the myth of Athena’s birth through his head, since it is on her shield that the severed head of the gorgon finally comes to rest.”

Charlene Spretnak says it perhaps most simply in her book, Lost Goddesses of Early Greece:

“Athena (or Athene) was originally a Cretan Goddess who watched over the home and town. Attributes of fertility and renewal are expressed in her association with tree (or pillar) and snake symbolism, respectively. She is patron of wisdom, arts, and skills, and she especially protects architects, sculptors, potters, spinners, and weavers. Athena was also the Goddess of the matrifocal Pelasgoi of the Peloponnese; in addition to her strong following on Crete, she was venerated at the following pre-Hellenic sites: Argos, Sparta, Troy, Smyrna, Epidaurus, Troezen, and Pheneus.

When the Mycenaean princes of the mainland adopted and adapted Athena, she was assigned a martial character. She became the shielded defender of their citadels, particularly Athens.

In Olympian mythology Athena is firmly established as the cold, rigid Goddess of war. So suppressed and/or forgotten are her matrifocal Cretan origins that she is represented as a daughter born without a mother, having sprung fully armed from the head of Zeus.”

Athene’s Resolve (as told to Aridela):

I have lived many lives since the beginning, and so shall thee. I have been given many names and many faces. So shall thee, and thou wilt follow me from reverence and worship into obscurity. In an unbroken line wilt thee return, my daughter. Thou shall be called Eamhair of the sea, who brings them closer, and Shashi, sacrificed to deify man. Thy names are Caparina, Lilith and the sorrowful Morrigan, who drives them far apart. Thou wilt step upon the earth seven times, far into the veiled future; seven labyrinths shall thee wander, lost, and thou too wilt forget me. Suffering and despair shall be thy nourishment. Misery shall poison thy blood; thou wilt breathe the air of slavery, for as long as thou art blinded. For thou art the earth, blessed and eternal, yet thou shall be pierced, defiled, broken and wounded, even as I have been. Thou wilt generate inexhaustible adoration and contempt; until these opposites are united, all will strangle within the void.

(Both photos from Wikipedia)