I was struck by this word as I was writing The Year-god’s Daughter, startled by how it used to mean one thing and somehow came to mean quite the opposite.

But as hard as I search, I cannot now find that original source for this information–the book I read it in long ago.

So I am forced to copy here the meaning widely disseminated across the Internet.

Anathema (from Koine Greek ἀνάθεμα “something dedicated, especially dedicated to evil” from ἀνατίθημι anatithēmi, “I set upon, offer as a votive gift”) originally meant something lifted up as an offering to the gods; it later evolved to mean:

There is some difficulty translating this word, especially since it has now become

commonly used with the term accursed or accustomed. The original meaning of the Greek word, as used in non-Biblical Greek literature, was an offering to a god.

The Hebrew word herem (חרם) referred to something forbidden or off limits. It was used in verses such as Leviticus 27:28 to refer to things offered to God, and hence off limits to common (non-religious) use. Because the Greek word anathema meant things offered to God, it was used to translate the Hebrew word herem in such contexts. Thus, the meaning of the Greek word, under the influence of the Hebrew word, was eventually taken as meaning “set apart”, (like herem) rather than “offering to god”, and eventually the word came to be seen as meaning “banished” and to be considered beyond the judgment and help of the community.

In Greek usage, an anathema was anything laid up or suspended; hence anything laid up in a temple or set apart as sacred. In this sense the form of the word was once (in plural) used in the Greek New Testament, in Luke 21:5, where it is rendered ‘gifts.’ It is used similarly in the Book of Judith, where it is translated as ‘gift to the Lord.’ In the Septuagint the form anathema is generally used as the rendering of the Hebrew word herem, derived from a verb which means (1) to consecrate or devote; and (2) to exterminate. Any object so sacrificed or devoted to the Lord could not be redeemed (Numbers 18:14; Leviticus 27:28-29); and hence the idea of exterminating was connected with the word. The Hebrew verb (haram) is frequently used of the extermination of idolatrous nations. It had a wide range of application. 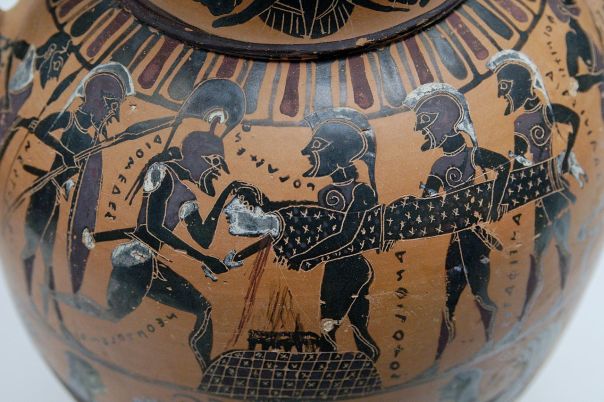 The anathema or herem was a person or thing irrevocably devoted to God (Leviticus 27:21, KJV); and “none devoted shall be ransomed. He shall surely be put to death” (KJV).  The Hebrew word therefore carried the idea of devoted to destruction (Numbers 21:2-3; Joshua 6:17); and hence a majority of scholars have treated the word anathema similarly, generally as meaning a thing accursed. For example, in Deuteronomy 7:26 an idol is called a herem = anathema, understood to mean a thing accursed. There is however, an alternative view that the Greek word ‘anathema,’ in these passages, was used by the Greek Septuagint translators to mean “offered up to God.”