Child of the Erinyes Box Set

“Duh,” you might be thinking. “Why did she never do this before?” Good question. A light bulb finally went off in my brain and I have rectified my lapse, which means that a digital box set of the first three books in The Child of the Erinyes series is available at Amazon!

Honestly, the Bronze Age segment of the series was always meant to be ONE book. That’s how it was written. But it was just too big. Put all together, it runs nearly 900 pages. As a new author, I didn’t think anyone would be willing to take a chance on such an enormous story, especially in print form, (so heavy!) and those with far more experience advised me to split it up. But my heart always wanted it to be one, so I am thrilled to 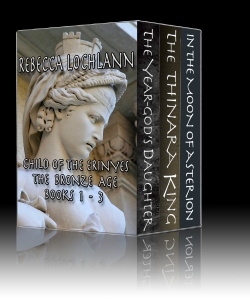 announce this new release. The entire Bronze Age portion can now be read in one fell swoop, and priced at $7.99, that makes one of the books FREE when compared to buying each separately.

The ebook boxed set includes the following full-length novels: The Year-god’s Daughter, The Thinara King, and In the Moon of Asterion. There is also a preview to Book Four, The Sixth Labyrinth, at the end, and NEW CONTENT, never before posted anywhere, from Book Five, When the Moon Whispers, and Book Six, Swimming in the Rainbow.

As you may or may not know, the first three books encompass the “beginning,” of The Child of the Erinyes series. All three are set in the Bronze Age–1600s BCE Crete, (and Mycenae)–to be exact, during the era of the cataclysmal volcanic eruption on the island north of Crete, nowadays called Santorini. (In my books, it’s called Callisti, one of its ancient names.) It’s a coming of age tale, a mythic saga, a story of love, hate, lies, subterfuge, the struggle for power, and the hope of redemption.

For ninety days, I’ll be pulling the books from other retailers in order to comply with Amazon’s requirements so that I can run a few handy-dandy promotions. Which means two things: if you read books on a Kindle, keep an eye on Amazon for upcoming special deals on the individual books, and, if you’re a member of the Amazon Kindle Unlimited program, you can read each book for free.

Once the box set is up and running, I’ll be able to get back to work on The Sixth Labyrinth. It, too, is a colossal book: nevertheless, I’m hoping to publish it in one volume, and the one after that, as well, if possible. The last book of the series (Swimming in the Rainbow) is currently a mere 70,000 words–hardly bigger than a novella!

For those of you who have already read the Bronze Age portion of the series, I hope to whet your appetites for what is still to come.

A silenced but enduring Goddess has seen her place in the souls of humans systematically destroyed, but she bides her time. For Athene, thousands of years mean nothing.

The Bronze Age prophecy:
I have lived many lives since the beginning, and so shalt thou. I have been given many names and many faces. So shalt thou, and thou wilt follow me from reverence and worship into obscurity. In an unbroken line wilt thou return, my daughter. Thou shalt be called Eamhair of the sea, who brings them closer, and Shashi, sacrificed to deify man. Thy names are Caparina, Lilith, and the sorrowful Morrigan, who drives them far apart. Thou wilt step upon the earth seven times, far into the veiled future. Seven labyrinths shalt thou wander, lost, and thou too wilt forget me. Suffering and despair shall be thy nourishment. Misery shall poison thy blood. Thou wilt breathe the air of slavery for as long as thou art blinded. For thou art the earth, blessed and eternal, yet thou shalt be pierced, defiled, broken and wounded, even as I have been. Thou wilt generate inexhaustible adoration and contempt. Until these opposites are united, all will strangle within the void.

She vowed to bring back her daughter and “an immortal corps” of followers, and she does. Aridela and her companions experience history first hand, living it as it unfolds, not as royalty any longer but as ordinary human beings with extraordinary psyches.

The Sixth Labyrinth: nineteen-year-old Morrigan Lawton knows she is different–fears she could be a changeling, or even mad. She tries to hide her oddities, because this era in history is quite fond of their insane asylums–especially for women. She is plagued by nightmares, sacrilegious thoughts, an intense imagination, and an indomitable nature that just doesn’t fit in straitlaced, conservative Stranraer, Scotland, during a very tightly corseted and patriarchal Victorian era.

Her wild, high-flying spirit is nearly crushed beneath the expectations and mores of the time, not to mention her father’s iron fist. Thankfully, change arrives in the form of one Curran Ramsay, a young landowner from the Highlands. Is their meeting chance, or was it designed? Where is the third point of the triad…and the rest of the immortal corps promised by Athene? All are brought together again, to live and learn in a place very far removed from the palace and labyrinth on Crete so long ago.

The setting has a big role to play in this sweeping tale, from sleepy Stranraer on the shores of Loch Ryan to the remote, enchanted village of Glenelg, tucked beneath the imposing summits of the Five Sisters of Kintail. Here, in a spot still utterly devoted to the mystical beliefs of a rich Celtic past, Morrigan comes face to face with destiny. The story stays on the move, to moody Loch Torridon, to the thundering 900 foot cliffs at Cape Wrath, to cosmopolitan London, and finally, to the awe-inspiring, sea-scoured Hebrides islands.

Why Scotland? I needed a change of scene, a completely different culture, new research challenges. So did my protagonists! Scotland is a magical place, where the veil between ancient myth and mortals is thin. I spent a month in Scotland visiting these settings while researching the book, and believe me, there is something about it that I have never sensed anywhere else–especially at the haunting ruins of Castle Kennedy, not far from Stranraer.

The Sixth Labyrinth will be accompanied by two companion novellas: these can be read before, after, during the main story, or not at all. If you read The Sixth Labyrinth and find yourself wondering more about Morrigan’s father and mother, or what sparked the instant, incomprehensible attraction between Morrigan and a certain poor fisherman, all is revealed in the novellas. There are hints of future events as well.

I was raised on huge books. I like feeling immersed in a big, encompassing tale. I hope there are others who feel the same way, and if A Game of Thrones is any indication, there remains a healthy contingent of long-story lovers out there. So I offer my usual disclaimer: it’s not for everyone, but if you enjoy disappearing into a long, complex saga with sequels, what I like to call a myth with meat, I hope you’ll give The Child of the Erinyes a try.

Bibliographies, myths, history, links to excerpts, and more can be found at my website: Rebecca Lochlann

Posted in Box Set: Child of the Erinyes, Uncategorized