Minos is a well known title, accepted across the world as the name of a dynasty of kings on Crete. But Robert Graves translates the word “minos” as “Moon-Being,” which suggests it is feminine. Here’s what Graves says in The Greek Myths:

“Minos was a royal title of an Hellenic dynasty which rules Crete in the second millennium, each king ritually marrying the Moon-priestess of Cnossus and taking his title of ‘Moon-being’ from her.” ‘Hellenic’ suggests the term ‘Minos’ relating to a ‘king,’ did not come about until the Hellenic era. It also suggests very strongly that the title belonged to a woman.

Here are several more of his quotes: 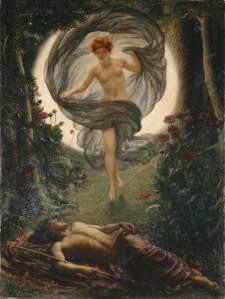 “The triumph of Minos, son of Zeus, over his brothers refers to the Dorians’ eventual mastery of Crete, but it was Poseidon to whom Minos sacrificed the bull, which again suggests that the earlier holders of the title ‘Minos’ were Aeolians. Crete had for centuries been a very rich country and in the late eighth century BC was shared between the Achaeans, Dorians, Pelasgians, Cydonians (Aeolians) and in the far west of the island ‘true Cretans’.” This line also suggests that the male “Minos” won the title at a later date.

“Pasiphae and Amphitrite are the same Moon-and-Sea-goddess, and Minos, as the ruler of the Mediterranean, became identified with Poseidon.” Again, the suggestion is that Minos is a later invention, perhaps after an overthrow.

“Zagreus:  this myth concerns the annual sacrifice of a boy which took place in ancient Crete: a surrogate for Minos the Bull-king. He reigned for a single day, went through a dance illustrative of the five seasons – lion, goat, horse, serpent, and bull-calf – and was then eaten raw.” The holy Day out of Time, which plays an important role in my books.

Graves also says that “Two or three Minos dynasties may have successively reigned in Cnossus.”

In my story, “Minos” is the title of the High Priestess and holy oracle, Themiste. Minos is a secret title, known only to those initiated into the Cretan Mysteries.

Jacquetta Hawkes theorizes about Crete’s ruling house BEFORE the familiar “King Minos” in Dawn of the Gods:

“In the scenes from the seal-stones, not only is the Goddess always the central figure, being served and honoured in a variety of ways; she is sometimes shown seated on a throne. Supposing that a king did rule as consort of the Goddess, one would expect at the very least that at the royal court, which elsewhere, in Egypt and the Orient, was seen as the human reflection of the divine order, there would have been a throne for the queen as the counterpart of the Goddess. Yet in the sacred throne room at Knossos, and apparently also in the state apartment in the residential quarter, the throne stood single and alone.

If it were not for the tradition of King Minos, and the corresponding absence of any recorded memories of Cretan queens, and perhaps also certain strong if unconscious assumptions among Classical scholars, it seems that the archaeological evidence would have been read as favoring a woman on the ritual throne at Knossos.”

She also says: “In addition to these characteristics, there was another which much more strongly implies the self-confidence of women and therefore their secure position in society. This is the fearless and natural emphasis on sexual life that ran through all religious expression and was made obvious in the provocative dress of both sexes and their easy mingling.”